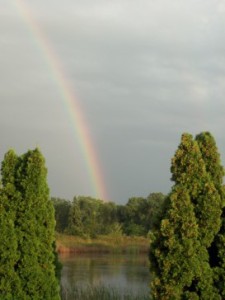 A few months ago I wrote about trying to do both (1) some different things and (2) more in general.  I’ve been in quite a rut over the last few years of struggling with my unwinding muscles and their serious disruption of sleep.

It’s been an up and down process.  With every spell of sleep deprivation, I lose the will to do more or try new activities.  But the first steps in getting moving created so much more energy and overall sense of well-being, I keep pushing myself to get out more, create new grooves, etc. whenever I’m feeling well enough.

So it was interesting when I took Linda’s suggestion (litebeing post here) to watch Matt Kahn’s video, Energy Upgrade.  One of the main things he emphasized was how change, even in a small thing, creates energy upgrades.  The best way to create a new life/new you is to keep saying yes to new things.

I got a kick out of realizing that my little forays out of the house or into trying new things felt so good because I was upgrading my energy.  Here I thought it just felt good to get out of my rut.  I guess it’s both.  So now I’m making more of a point of changing it up.  I’ve had a couple of days lately when I didn’t feel great and didn’t much want to get ready and go out but made myself run an errand and felt so much better for being out and about.

I’ve been talking for a while about getting back to writing longhand.  And feeling drawn to spend more time hanging out on our sun porch.  Then, the other day, when Mimi over at Manger posted a Spotify playlist that looked pretty good, I first thought I’d probably not get around to listening to it.  Just because I usually never do.  Which led me to think about how many playlists I’ve passed up mainly because I’m in this rut that doesn’t have a space in it for checking out playlists.

Putting the three together, I’ve started taking my Transformer tablet (for Spotify), a writing pad and a pen out to the sun porch for 15 minutes of timed writing while listening to a playlist (it already turned into a longer stretch, but my commitment is just 15, making it easy to carve a space for it) .  Really liked the jazzy 50’s mood of the first–Manger– playlist.  The next one I tried was full of songs and artists I’d never heard of and much of it was country stuff I didn’t much like, but even though I kept jumping forward to the next song and the next to get past tunes I didn’t care for, I heard a few new things I did like.  Whether I liked them or not, I could feel the opening from just being willing to hear some new material.

I’ve also made a promise to myself that this doesn’t have to be a daily practice.  In general I’ve been in the mood to keep changing things.  I’ve been back to exercising more, but instead of settling on one or two things to do regularly I’ve been switching around amongst many favorites from hatha yoga to kundalini yoga to the Eight Key Breaths, to my exercise bike, etc. (which, btw, I started some time before I saw the video).

And that’s what I’m drawn to in general right now–do the meditation or exercise or new thing that springs to consciousness each day without worrying about consistency or frequency.  The ups and downs of muscles and sleep occasionally still interfere with keeping a schedule; I find it less defeating to avoid making myself promises about regularly scheduled activities.  But for right now, I like my little writing practice/playlist, sun porch time so I plan to continue.  At least until I have some other new direction to try…

My big take away on this is that each small decision to do one tiny thing that’s new or different can carve a path out of a stuck place.  I find, when particularly stuck, that if I think too big (which doesn’t have to be really all that big) I become paralyzed, which roots me more deeply in the stuck place.  But I can decide to go sit on the porch.  Or to listen to a playlist.  Or to go run an errand to make myself get out of the house.  And those little things give me such a boost.  The more little steps, the more I feel I can move forward.  And the more I feel my energy upgrading 🙂

7 thoughts on “Working on a new normal”