The Kentucky River by Halls at the River, photographer Leigh Gaitskill copyright 2019

Environmental impacts on water have been of interest to me since the late sixties, when big water issues near me on the Great Lakes were in the news.  In recent years I’ve been following with great concern the conversation about clean water becoming scarce around the world.  Then when crisis hit my home town of Flint, Michigan, alarm bells started sounding.

Since Flint, there are increasing numbers of cities with lead problems popping up and eerily little media attention to the issue.  I’m pretty aware of a number of cases because I do a lot of poking around in environmental issues, but you’d have to be really looking to realize how widespread the issue of lead in water due to old pipes is.

Among those who are more aware of the water problem, there’s often a call for federal action  It’s another place where I think local plans from communities coming together may provide more and better answers  Given the many problems besides old pipes that are coming to a head about even having sources of clean water, I don’t think a giant plan to put in new pipes is our best answer. 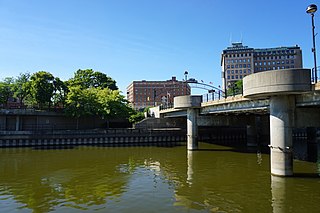 For Flint, there’s an immediate problem of organizing enough drinking water for the populace.  There are a couple of passionate folks I’ve encountered on Twitter who are raising money for bottled water — Lance Cooper @escapedmatrix and Mari Copeny @LittleMissFlint; check them out and donate if you can.  But I can see the problem requires a bigger solution and something more sustainable.

I’ve been looking at rainwater collection as an interim possibility.  First, the technology already exists for both collecting and purifying it and it’s widely available.  Second, it would help them keep an ongoing supply of water.  Third, if you could throw holding tanks into the deal and a give-away of good-sized re-usable jugs, with a number of centers (probably churches and/or community centers), people could collect decent amounts of water as needed.  Not a permanent solution as rain fall is too unreliable, but possibly helpful while a better answer is sought.

It’s a poor community and this would cost a lot more than a fundraiser can garner.  The City of Flint is broke (thanks so much General Motors for abandoning the town).  So I’ve been looking at the Charles Stuart Mott Foundation, which happens to be located in Flint.  In fact, Flint is one of the foundation’s missions and they also have an Environmental mission, so I can see a grant proposal that ties these two arenas together.

Not every state allows rain water collection so not an answer for some places, but Michigan doesn’t have a law in place that prevents it.  I’ll be exploring some other technologies and potential drawbacks below.

A second phase would involve something like water purification systems for homes in the area.  Possibly the right person or group could get a company that makes them to give a break or make a donation and a grant could cover the remaining cost and installation.  Below I also look at a few other up and coming technologies for supplying water without using current sources or pipes.  Mari has started a fundraiser to buy purifiers.

I don’t have connections in the area any more (and was too young to have this kind when I lived there), so don’t know community groups who could put in a grant proposal, and I am not an expert at writing a winning grant proposal, so I’m hoping there are people who DO know who can step up.

Foundation support will likely not be the answer as the problem grows more widespread, but Mott is not alone in offering grants for communities and/or for environmental projects so the towns with immediate issues could potentially use grants to help create local supplies of water.

For an excellent analysis of the issues for Flint and why the community should take charge: Flint Water Crisis: The Importance of Building a Grassroots Environmental Justice Infrastructure

Throughout this series I’ve been advocating a shift to local forums for everything from jobs to manufacturing to governance.  While many who are looking at the growing water crisis and demanding federal action on large scale infrastructure, I’m not so sure the feds are our best hope nor that simply replicating the current water supply system is our best long-term answer.

Given the scale of climate change, I think the current water crisis is a perfect moment to think in terms of sustainable answers.  And the means and methods of sustainability are going to vary widely with locale given differences in climate, water sources, etc.  As I continue explore the growing co-op movement around the world, I’m thinking that local and, in the case of large cities, sometimes neighborhood, co-ops dealing with water may do a better job.  At the least, local governments are better situated to work on the specific needs and possibilities of their communities.

In Texas, for instance, after the big drought of 2011, a number of cities instituted serious changes in how they collect water and their chosen means were very much suited to the local climate and how water is available.  See Six Alternative Water Sources for Texas.  See also: Alternative Water Sources: Supply Side Solutions for Green Buildings for discussions of a number of solutions being used in cities scattered around the U.S.

Poor neighborhoods are particularly under-served when it comes to safe water and in some areas strong community advocacy groups have been instrumental in getting things done.  If your town or area is having trouble about water and you don’t have such a group, I highly recommend that you look into some of the already-existing ones and create a group that suits your issues.

I’ve read a few things about a group in L.A. which advocates for south L.A., where Black and immigrant residents are disproportionately harmed by environmental issues.  Strategic Concepts in Organizing and Policy Education’s (SCOPE) work for social, economic and environmental justice is impressive.  Other groups to explore:  Detroit, West Harlem Environmental Action, Deep South Center for Environmental Justice partners with various communities around the South to promote environmental justice.

There is so much info, I can’t provide an exhaustive list but there are a couple of promising avenues to discuss and then I have a lot of links to articles discussing various alternatives to draining all the rivers and lakes, etc.  One thing I’m finding I want to emphasize is potential environmental impacts if some of these things are done on a large scale.

A number of inventors have created devices using solar to create water by drawing water from the air.  Sounds great if you’re talking about one or a few.  But I can’t imagine there’s not an environmental impact down the road if you put thousands and thousands in place, sucking all the moisture out of the air.  So far I’m striking out at finding any environmental impact studies on them at all.

Rain water collection systems are not legal in every state.  Particularly in places with water supply problems, rain water run off is part of the water eco system and states have outlawed it, claiming the state owns that water.  Michigan at the moment has a big supply of water so has not outlawed it, but as water becomes more scarce everywhere I can see potential for multitudes of rain water collection systems also causing detrimental environmental impacts.  Right now they’re available but not that common and it seems like a good solution but I’d like to know if there’s a tipping point where collecting rain would become more of a hazard than a help.

There are also a variety of desalinization devices, including solar, many already in operation in places where it’s suitable.  Again I’ve not seen an environmental impact assessment regarding widespread drawing on salt water sources and taking out the salt.  Seems like another spot with an eventual tipping point from help to harm.

There are other innovations coming along all the time for creating potable water so it’s worth snooping around on the web every now and then to see what’s new.

The latest issue of the alumnae magazine from my Alma mater, Northwestern University, had a really good article about water and efforts being made by various professors in various departments to find solutions.  Solutions for Troubled Waters.

The whole article is worth reading but I particularly noted a couple of resources.  Chemistry professor Will Dichtel has a company offering some of the solutions, from home purifiers to waste management and more, CycloPure.

The director of the Environmental Advocacy Center of the law school’s legal clinic was highlighted and I was interested to note that the Advocacy Center offers help to communities in many places, not just Chicago, so a good potential resource in the U.S.- and apparently they’re working on becoming international.  Their solutions are not just legal, but include help in solving problems, sometimes in conjunction with other NU departments, so a good resource to know about.

The EPA also has a grants program that offers up to $30,000 to community organizations working on environmental justice issues.  Seems like a great place for people in a town like Flint or Newark to propose a program to help with the water crisis.  Environmental Justice Small Grants Program

And some miscellaneous articles on water issues: