Note: readers here who are also on FB with me know my father is in hospice. It definitely deserves a post or two but I’m not ready to do it yet… 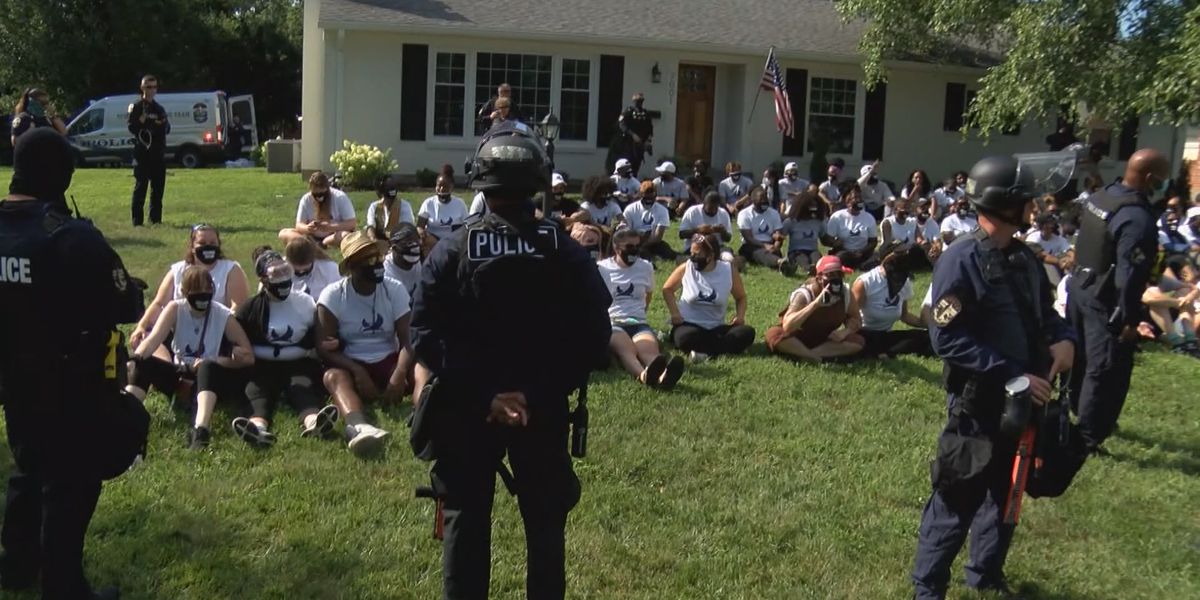 Here in Kentucky a big, debated news story in recent weeks has been the tale of two protests with wildly different results. In one case, white supremacists armed with assault rifles spent two hours around the Governor’s mansion yelling, banging on windows and threatening with their guns. Not one arrest was made.

In the other, peaceful  Black Lives Matter/Breonna Taylor protesters sat quietly, arm in arm on the KY Attorney General’s lawn. All 87 were arrested and charged with felonies (charges later dropped). Much outrage has ensued over the disparity of treatment.

After the incident at the govenor’s mansion, Governor Beshear gave an emotional speech in which he talked about how one of the rooms where they were banging on windows is the room where his children play and it was only happenchance that they were not there. I’ve been edgy for quite a while about protests at people’s houses — as well as politicians being assaulted in restaurants (and yes, verbally attacking someone in a threatening way is assault), etc.  And listening to the governor has put me solidly in the position of feeling adamantly that both sides should cease and desist on this bit of going to people’s houses to protest.

My main reaction comes from a spiritual belief in non violence; as “Governor Andy” spoke it hit me forcefully that to anyone at home, be it a cleaner, children, grandparents, wife, etc., a huge crowd of people showing up on the lawn is violence.

But also from a legal place about where our laws and Constitution say freedom of speech is operable and where it is restricted. In this case I think the obvious disparity between a peaceful situation and a situation that threatened incredible violence — which is against the law and should have led to arrests and prosecutions — makes the concluson of racism in operation inevitable but it ignores a couple of things about protesting that I believe should guide protestors of any persuasion.

In this particular case, besides the general attitude of giving white people a pass, I think the differrence in place also had something to do with the different responses. It is legal to protest on public property. Protesting on private property is NOT protected by the First Amendment and has been held illegal both via Supreme Court opinions and laws.

Again, there are other laws unrelated to free speech that, in my opinion, were violated. I haven’t dug through KY statutes, but generally it’s illegal to threaten violence or assassination of an elected official and I’d say waving guns around on the govenror’s front porch (or in a state legislature, etc.) constitutes a threat sufficient to file charges.  So I don’t disagree that a very different standard was in play for the thugs at the Governor’s Mansion.

A better comparison here would be the hypothetical case where the 87 protestors decided to show up outside the Attorney General’s office. In this case they’d be on public property and within their rights to protest and as long as they were peaceful, I doubt any arrests would have been made. It’s protected.

To me, given how well known it is that free speech doesn’t allow people to protest on private property it seems ill-conceived to even consider protesting on someone’s lawn. There are a lot of legal advisors around for such groups/protests whom I think should be telling people to stick to public property.

I generally find when most Americans speak of non-violence they fail to understand the full meaning of it as it is practiced in the traditions from which the idea came (and which MLK studied to create his non-violent stance). Americans often think it refers only to whether you do something physical, whether it’s hitting someone, breaking a window, throwing a rock, etc.

In Hindu and Buddhist non-violent traditions, far more is contemplated. Being non-violent means not using words to attack. It means being compasssionate in your thoughts. It means taking no action that would lead someone else to feel threatened.

When I look at the pictures of the 87 protestors sitting quietly on the lawn and imagine what it would be like to be 10 years old and looking out the window of my house to see 87 strangers sitting on my lawn because they were mad at my dad, I don’t think they’d feel non-violent to me. If I were a wife, home alone, and glanced out to see a crowd of strangers on my lawn, I don’t think they’d have to throw a brick for me to feel afraid.

Taking actions that lead other people to feel afraid is violent.  Protestors who want to follow a non-violent path should stay away from private homes. And if they don’t they should realize they don’t really believe in non-violence.

This is a really tough one. I totally see the view that circumstances are so dire that some radical action is required.  At the same time, I feel there are plenty of ways to make a point with a protest without frightening someone’s family members.  And to do it in an arena wherein free speech is protected.