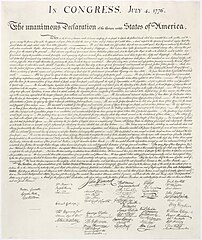 So much controversy lately has me thinking deeply about the U.S. Declaration of Independence and the Constitution.  Many are dismissing both as products of slaveowners; because the writers were flawed, the documents are no longer valued goes the thinking.  With a lifelong tendency to see both sides — a product of constantly being in the middle wihtin my family’s arguments — I see a path down the middle.

I’m a person of words, so for me, even over the years since I realized our Founders were far more seriously flawed than our history books led us to believe, the brilliance of the words they crafted still shine.  Largely helped by my long-ago Constitutional Law class in law school, I see a Constitution that has been able to grow and evolve over time.

When you read through the landmark cases of generations you see how the carefully honed document left room to interpret broader truths and equities than the men who wrote it lived within.  They were bright enough and good enough at writing, I don’t think it was an accident that, even though they created restrictions about gender and color, many of the actual words of both the Declaration and the Constitution leave room to dream of literal equality for all, though they may not have foreseen where it led.

The stepping stones from one SCOTUS decision to another also reflect both how we have grown as people in our understanding of what “equality” really means and how the interpretation of the Constitution has grown too.  In those broad words about equality Blacks have found the inspiration to press for them to be true for everyone and that history is one every child should be learning in school.

As I reflect on Independence Day, I see room to reject the flaws of the Founders and still celebrate the brilliance of what they created and how they left a foundation with room to evolve.  At this moment we are in a new stage of evolution in making the notions of justice and equality for all, without exception, true.  Sometimes evolution in law drags us forward, sometimes thinkers who are ahead of the time push the law to change. Together we grow.