The class on Co-Humanity and Compassion more or less ended last weekend (material stays up for six months and we can keep working on it and post about it) and I sort of dropped off.  As mentioned in another post about the class, I struggled early on with the secular viewpoint and the final push was to make a plan concerning what we intend to do to help “bridge the/a divide”.

In the end, while I seemed to fall out of step with the class and its goals, its thought-provoking nature and my deep contemplation of my discomfort with it have brought me in step with myself.  Seeing where I’m aiming more clearly.

Pretty much all instructions made it clear that creating a meeting, setting up a facilitated dialog, joining an interfaith discussion were the intended kinds of plans.  Action out in the world would count as “doing something”.  Prayer, meditation, raising consciousness, etc. don’t count.

The issue of what constitutes “doing” is one with which I’ve grappled for a long time–in fact I wrote a post some years ago asking what If prayer is something?  I’ve now come down firmly on the side of believing that praying, envisioning, meditating, clearing issues and any other forms of clearing lower energies and raising vibration are not only doing something but perhaps the most important something we can do.

In a world where SO many people don’t believe that last statement to be true, I also see the proliferation of attempts to build bridges, change policies, etc. as important steps in the process.  So I’m not discounting the efforts of the do-tasks form of action, just stumping for the great importance of understanding we’re all part of one great consciousness and every time we lift the level of vibration we change the world.

When I read David Hawkins’ Power vs. Force to some extent I felt I was reading confirmation of something I already knew.  His extensive studies on energy levels and how they impact the whole are, I think, probably just a beginning.  When science really learns how to study this stuff I imagine there will be many refinements.  But the basics he lays out in the book I think describe how it works quite well.

There’s a scale of energy vibration/consciousness: 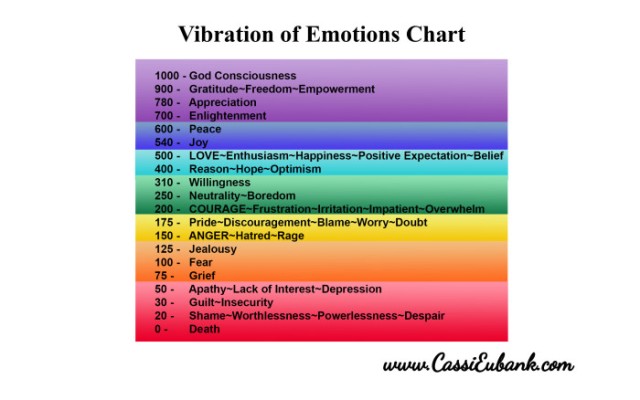 The higher the level at which a given individual is vibrating the more people he or she can counterbalance:

Accepting these numbers means a relatively small number of people who raise their own vibratory pattern to a higher level can not only counterbalance many who operate at lower frequencies, but can lift the consciousness level of the whole. My personal take on some of the anger and chaos unleashed now is that the huge number of people around the world who have been on a spiritual journey of clearing old issues and meditating, etc. to raise consciousness have lifted a huge portion of the population out of the 50 and below range into the 75 to 100 range where jealousy, anger, etc. dwell.

When enough of the world is lifted above 200, I think that is when we will begin to see peace and harmony unfolding.

So my plan is to continue on my People Power series. From the spiritual perspective there are two main points to the series and then a third more secular one.  (1) In many places I’m pointing out places where cultural issues are embedded in our collective consciousness and need to be released; (2) spoiler alert I’m going to advocate for the power of creating visions, meditating, etc. to help shift the planet; (3) I’m suggesting some”practical” doing steps that move outside the normal boxes and suggest radical change.

So that’s my plan and I’m sticking to it!

8 thoughts on “Working on a plan…”