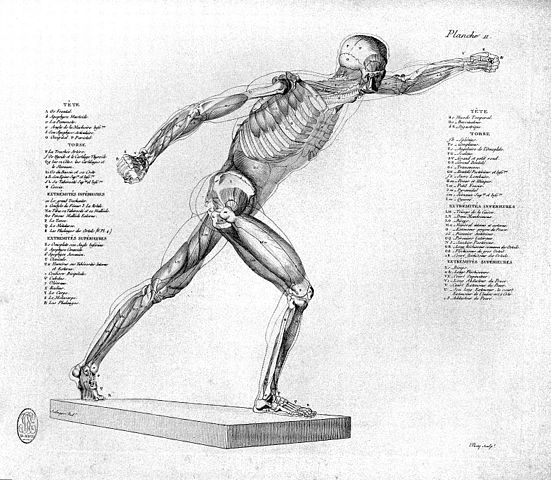 My knowledge of muscles is taken from many places.  From a section on anatomy and muscles in my yoga teacher training, to info on muscles liberally dispensed by yoga teachers and multiple body work therapists to reading on my own, I’ve been learning about muscles for 30+ years.

The key factor I would emphasize is that most of us are woefully ignorant about our muscles and the central role they play in our health, well-being and ability to get around.  Western medicine largely ignores muscles, so many problems go undetected because they don’t even look for damage when you’ve fallen or been in an accident.

It’s worth learning about your muscles and seeking assistance outside of allopathic medicine in order to maintain muscle health and to restore it to balance after injury.

Since this is everyone’s least favorite aspect, let’s get it out of the way 🙂  At times of trauma and/or drama we tighten our muscles and often the emotions evoked by these events wind up locked in knots in the muscle.

When you start opening the muscles, whether through practicing yoga, getting body work or treatments like acupuncture, those emotions and the memories associated with them are going to surface.

I think it’s one of the biggest reasons body work may plateau; resistance to remembering and/or releasing leads the person unconsciously to tighten.  In yoga people prevent these openings by getting out of a pose as soon as the muscle starts to relax enough to let those memories and feelings rise up.

Getting clear of old issues almost always needs to include some work on muscles in order to open the flow and restore essence.

America has somehow come to the conclusion that healthy muscles need only to be strong.  It’s a persistent misconception even though multitudes of people who work only on strength have wound up suffering pain from the impact of having muscles that are rigid but incapable of flexing.

Natural movement through the world requires muscles to have both the strength to make certain movements and hold certain parts of the body upright and the flexibility to allow you to balance, and to adjust to the motions life throws at you and, even more important, to allow vital force energy to flow throughout your body.

The nadis, or energy channels, through which prana (chi, qi, vital energy…) moves go through the muscles.  Rigid muscles restrict that flow.  Western thinking and medicine understands very little about energy, but energy and its ability to circulate is crucial mentally, physically and spiritually to good health.

After 32 years of yoga I’m prejudiced, of course, but I think it’s one of the best ways to get your muscles into the perfect balance of strength and flexibility.  A good yoga practice works on balance on many levels and one of the important features of a good practice is performing poses for both strength and stretch.

The first serious massage therapist for me used a combo of sports medicine and the trigger point therapy theories of Dr. Janet Travell, particularly as shaped by Bonnie Prudden in Myotherapy.  Because muscles are interconnected, a holding pattern in one area will spread –given enough time, tightness can spread throughout your body — and may create a tight spot that hurts somewhere else.

If you work only where the pain is, you will not get rid of the problem.  Practitioners who know how to follow patterns* can figure out where the source of the problem really is.  When that piece releases, others will be easy to open.

Margaret, that first practitioner, often worked on my neck, couldn’t get anything to budge, moved down to a giant ball of knotted muscles at the top of my achilles tendon, worked there and then went back to my neck, where the muscles would now respond.

In Body Patterning, practitioners learn to see patterns in muscles and will often release several other areas before working on the place where you’ve indicated pain.  They’re releasing pieces that are holding that one and the spot you may think is central will not let go while the other patterns hold.

Another aspect of this is that your brain will numb out much of the pain if you have tight, sore muscles all over (or in many places).  Then it will zero in on one or two specific parts where you will experience the pain.  They’re not necessarily the places of origin for your problem.  Sometimes the pain is just referring from the pattern that’s the real issue.

Find a good practitioner –making sure you check on the training and experience — and trust him or her to work wherever you most need it regardless of whether that turns out to be the place where you feel pain.

When I do Flowing Body work on myself or with students, I generally do triggers of release for at least three areas and work with consciousness not only of before and after, but what has been affected by what.  For instance, during a recent knee problem, I did the triggers for ankles, knees and hips and noticed the ankle release did the most for the sore knee and the hip release was also more effective than the knee releases.

Another I’ve noted frequently, as have many students, is that releasing the ankles will often release something in the neck and/or jaw.  Almost every release will cause people to lower their shoulders even if no work has been done on shoulders.  Pay attention as you practice yoga or other exercises as to which movements bring relief where.

Many muscles are connected to bones which means muscles pulled out of alignment can pull bones out of alignment too.  In the early years of trying to work my way out of fibromyalgia –harking back to Margaret again — the massage therapist prescribed chiropractic appointments to help.

Once the muscles have pulled bones out of whack, it often takes work on the bones as well to get the muscles to release.  If you’re not keen on the invasiveness of traditional chiropractic work, try Network Chiropractic. which doesn’t use the bone crunching technique and instead is gentle touch.

Therapy and Self Care

Over time I learned that body workers can help a lot but if I don’t do anything to help in between appointments, progress is exceedingly slow.  There are a variety of things you can do to help

I’d already been doing yoga when I began getting massages, etc. so that has always been a natural piece for me.  But it was when I lived in the San Francisco Bay area that I became conscious of helping along more.

I’d moved out to Marin but still wanted to go to the same massage therapist and also liked going to Kabuki Hot Springs, a Japanese bath place with wonderful sauna, hot tub, steam, etc.  To save trips over the bridge I started booking the massages on one of the ladies’ days at Kabuki and going in to soak, sauna, etc. first.  The therapist quickly noted my muscles were much easier to work on from the deep heat work right before the appointment.

Then, years later when I started doing a trade for Body Patterning, I only had an appointment every other week and I knew I needed to do something to maintain from one visit to the next.  Yoga had always helped but not enough.  And the commute to Kabuki Hot Springs had become a couple thousand miles 🙂

I’d done Robert Masters’ Psycho-physical Method to tapes for years but found it unwieldy for regular practice.  I began doing some of this work in between appointments and gradually re-worked it into sets of my own which dropped some pieces and joined various disparate parts in his classes into sets that worked well together and then combined it with yoga

Practice in between helped and I began a practice of doing 30-60 minutes of this work shortly before massage appointments, with a long soak in a hot bath right before leaving.  Suddenly I was being told that I had released more since the last appointment.

Normally practitioners get a number of things to open and then a combination of repetitive motions performed in life and the pulling force of patterns still holding in your body take the progress backwards a few steps (say 4 steps forward, 2-3 steps back).  Then at the next appointment the practitioner spends 15-30 of the first minutes of your appointment getting you back to where you were at the end of the last appointment.

So doing your part through practices that maintain progress and making sure you’ve done all you could before an appointment, you can move much faster through the body work to healthy muscles.  Very little time needs to be spent on getting you back to where you were and most of the appointment is about progressing further.

It’s amazing how little it can take to start a problem with muscles and then it may take years before you feel the pain.  Yup.  Years.

I know I try the patience of some of my students with my emphasis on form in doing yoga and they don’t really believe me when I tell them doing it wrong can cause injuries.  If they’re not being wheeled out on a gurney at the end of class, to them there was no injury.

But do a pose wrong — or watch TV daily with your head turned or tilted or sit with your hips uneven, etc. — and keep doing it wrong and one or more muscles can be pulled a little out of place and/or strained enough to create a small knot.

At the time and perhaps for some time to come you probably won’t feel any pain at all.  But you’ve started a pattern. And if it goes untreated, the muscle will lock into the slightly-off-position and the first couple of knots will pull more of the muscle into knots.  Once that muscle is far enough out of whack it will start pulling all the muscles around it and causing them to tighten.

You might have started off pulling a muscle in your right hip out of place and a few years later it’s expanded until you’re having pain in your left shoulder and since you haven’t even done yoga for two years, you have no idea that doing it wrong started your problem.

The same is also true of having an injury and failing to get help.  You may stay off an ankle for a few days or go on bed rest for a spell and feel okay enough when you move again. But there’s a very good chance the trauma and the automatic tightening of muscles around it has set a little pattern.  Left untreated the pattern will remain and keep reaching out to affect more muscles.

The best way to protect your muscles from injury is to stay aware in the now.  Learn to do any exercise properly — and if your teacher can’t carefully explain the details of how to do something correctly, FIND A DIFFERENT TEACHER!!!  Also take care about positions you engage in routinely — how you sit, how you hold your head.

If you do an assessment and realize you’ve been twisting your neck when you sleep or sitting with one hip higher than the other, etc., seek help on identifying any patterns that have arisen and releasing them before they’ve turned into 20 patterns.

Bottom line, your muscles are important and you are the best steward in maintaining health.  Do what you can to keep them healthy and any time you have an accident or injury or feel a strain from repetitive motion seek help from alternative practitioners who actually understand muscles.