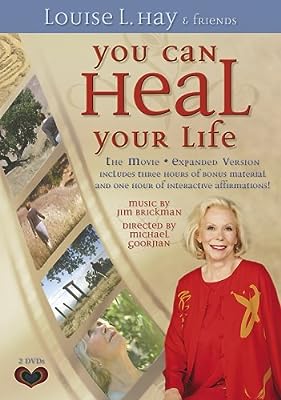 A couple of weeks ago a big storm took out electricity for a couple of day (previous post) and then our phone/tv/internet service went down for a week.  When the electricity came back but the other stuff was still out I pulled out some DVDs to have something to watch.

I’d been drawn for a while to re-watch some “positive” stuff, like Louise Hay’s “You Can Heal Your Life” or “What the Bleep”.  But you know, have to remember how to get in DVD mode and find the stuff to watch, so it kept getting put off…  But with DVD the only possibility, the draw became compelling.  So I started with the Louise Hay.  As I watched for what was probably the sixth or eigth time since i bought it, I suddenly felt like a switch flipped.

Having been aware of her mirror work for years, I finally actually went through all the exercises in one of her more recent books about it a couple of years ago.  I enjoyed it and felt like it did some good, though years of work on similar things meant it didn’t feel like a big change happened.  But I’ve long been aware of a gap for me between my intellectual understanding about positive thinking and my ability to hold on to positive thoughts.

Many people I’ve known over the years have seemed to just flip a switch upon encountering Ms. Hay or Eckhart Tolle or whichever “you create your reality” guru they found.  It’s always amazed me that someone could turn it around so fast.  Sometimes I realized they became very good at saying only positive things but it didn’t necessarily mean they’d really cleared the negative thoughts or explored their origins…

On my journey I realized in increments over many years that lots of old personal and ancestral issues created endlessly looping negative tapes in my thought patterns and that I didn’t know how to turn them off.  It’s taken years of release work, self-examination and creating positive thought loops to progress slowly into a more positive mindset.

But suddenly as Louise and friends discussed loving yourself and mirror work, something in me went, “yes, of course, I love myself.”  I’ve been smiling and looking in the mirror to repeat variations of loving myself affirmations daily ever since and spontaneously looping positive thoughts through my mind at intervals each day.

I’ve waited a while to write about this, wondering how well it would stick.  Must admit the constancy of it has faded a bit over the course of a couple of weeks (probably time to watch the video again?), but by and large I’m still finding myself running affirmations through my mind and smiling into the mirror daily.

It feels like a big shift.  One that was fed by all the work on shifting, sorting, examining and changing that went before, but a shift nonetheless.  Quite a blessing to receive from an outage!

The week+ with no Internet or t.v. has also changed my viewing and on line habits a bit, as I actually watch instead of half watching more things, take more time away from computer and t.v. to read, cook, weed, etc.  I have to say, frustrating as it was, the blessings were greater than the inconvenience.

8 thoughts on “Outage blessing: a shift”