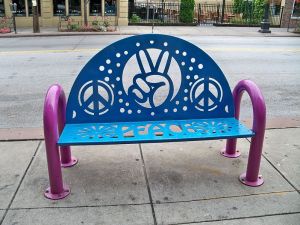 The plan when you last heard from me was to write a J2P post exploring the current thrall of the media and healing and that’s still coming but I’ve been sidetracking into explorations of the many movements going on these days.  I’m paying a lot of attention to the trend in many groups and among democrats, to define themselves by what they’re against and to speak constantly in terms of battles, fights, resistance, etc.

Some of these groups even talk about nonviolence while throwing out these violent words and I always wonder if they know ANYTHING about the traditions from which the notion of nonviolence came.  Americans, in particular, seem to believe nonviolence refers only to actions.  But in Hinduism and Buddhism, nonviolence refers to every level, including speech and thoughts.

When I receive notifications from “peace” groups and groups working for change that are filled with battle language and nasty slurs against the opposition, I feel my muscles tighten and my energy dim.  Their words of violence are painful to me and I’m convinced, whether everyone feels it as acutely as I do or not, such words hurt everyone who hears them.

I’m not saying we need to be in denial about what’s happening, nor am I saying we can’t get angry.  But the anger is only useful if we then mindfully turn it to compassion and doing something constructive.  Something that furthers progress on what we’re FOR.

There are some brilliant ideas starting to float around out there for ways to address what’s happening without violence.  I would like to see a combo of my two favorites, which are:  (1) setting up a fundraiser wherever the alt-right/neonazis are planning to march and taking donations based on either the number who show up or the distance they march and giving the money to a group that works against neo nazis or to the NAACP or SPLC or ACLU, etc. and (2) send tons of people dressed as clowns and armed with white flour and white flowers to throw every time the nazis yell “white power”.

Why not do both???  Or think outside the box some more and think of something even more brilliant???  (BTW scroll on down from the two videos for some links to great info on nonviolent activism.

And some resources on sacred activism: